English SDH
Announced on August 17, 1999, Pinocchio, also originally intended to be the last Walt Disney Masterpiece Collection title, but early copies have the Walt Disney Masterpiece Collection logo on them was released on October 26, 1999 instead as a 60th Anniversary Edition for the VHS version and as the first Limited Issue title on DVD. It was the film's third home video release. The last copies of this DVD left the assembly line on December 27, 1999, with sales ending in 2000.

On March 7, 2000, Pinocchio was re-packaged as part of the Gold Classic Collection. This edition was discontinued on January 31, 2002.

When the Gold Collection DVD was released, Pinocchio had a remaining copyright term of 35 years.

Walt Disney's immortal masterpiece Pinocchio has inspired millions to wish upon a star and always "let your conscience be your guide." Now celebrating its 60th anniversary, this timeless story of the wooden puppet and his kindly owner, the woodcarver Geppetto, is available to a whole new generation in this limited edition release!

On a magical starlit night, a blue fairy brings Geppetto's beloved marionette Pinocchio to life, beginning a fantastic adventure that will test the puppet's bravery, loyalty and honesty - virtues he must learn to become a real boy. Despite the warnings of his wise friend, Jimmy Cricket, Pinocchio gets entangled in one humorous predicament after another, leading to his valiant quest to save Geppetto, who's trapped inside Monstro the whale! 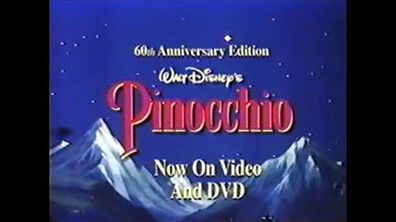