English, Spanish, Portuguese
This 2003 Special Edition DVD of Pinocchio was only released in countries outside of North America. But like all other Disney DVDs, this one was priced at the same equivalent price of $29.99, and was also discontinued on January 31, 2004 along with Sleeping Beauty, 101 Dalmatians II: Patch's London Adventure and The Jungle Book 2.

Walt Disney's second full-length animated feature focuses on the famous wooden puppet who wants nothing more than to be a real boy. Pinocchio (voiced by Dick Jones) is the wood-carved creation of Geppetto (Christian Rub). When the pair are visited by the Blue Fairy, she grants Pinocchio the opportunity to become a real, flesh-and-blood boy, but only if he learns to be brave, honest and unselfish. To this end Pinocchio is granted a conscience, one which comes in the shape of the diminutive Jiminy Cricket (Cliff Edwards). However, Pinocchio soon discovers that being good is not as easy as it sounds. The film won two Oscars, for Best Song ('When You Wish Upon a Star') and Best Original Score. 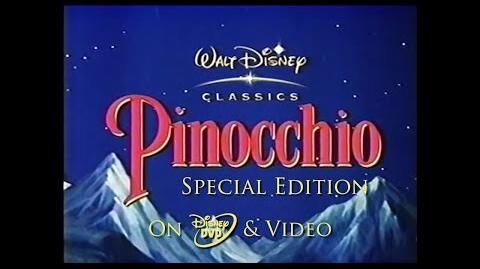