Set in the early 17th century, the Susan Constant sails to the New World from old London. Those on board include captain John Smith, and the leader of the English settlers, Governor John Ratcliffe. In the New World lives a tribe of Powhatans in Virginia, ruled by Chief Powhatan. Also living with the Powhatan tribe are Pocahontas, the daughter of Chief Powhatan, and a brave warrior named Kocoum, who Powhatan wants Pocahontas to marry. With her pets raccoon Meeko and hummingbird Flit, Pocahontas visits Grandmother Willow, an ancient willow tree who lives in a glade, and speaks of a dream involving a spinning arrow, and where her path in life should be. As the English settlers arrive to the New World, they dig for gold everywhere, while John Smith heads out into the wilderness. When the Powhatan tribe spots the English settlers, both armies immediately start a war. Powhatan immediately warns all his people that they must not go anywhere near the English men. Meanwhile, Pocahontas and John Smith develop a relationship with each other, and Smith is also included to Grandmother Willow. On the other hand, the Powhatan tribe summons more brave warriors to fight off the settlers. Later that night, as Pocahontas and John Smith share a kiss, they are both witnessed by Kocoum and Thomas. Kocoum attacks Smith and attempts to kill him, until Thomas intervenes and shoots Kocoum to his death. Thomas quickly leaves, leaving Smith to take the blame for Kocoum's death. Smith is taken as prisoner by Powhatan's men, and is sentenced to death by sunrise. Thomas runs back to the English settlers and warns them that Smith was captured by the Powhatans, and both sides prepare for a big war. Pocahontas returns to Grandmother Willow's glade and tells her that all hope has been lost. Meeko hands Pocahontas the compass he took from Smith earlier, and she realizes that the spinning arrow in the compass is from her dream! The arrow points to where the sun rises, and Pocahontas sets off (with the help of her mother's spirit) to stop the war between her people and the English settlers. Powhatan calls for peace between the two groups, as so does everyone else -- except Ratcliffe, who attempts to kill Powhatan himself, but instead shoots John Smith. Ratcliffe is sent back to England in chains, and Smith is also forced to go back to recover from his wounds. He asks Pocahontas to come with him, but she chooses to stay with her people, and declares that no matter what happens, they'll always be together forever.

This timeline only covers the first film. 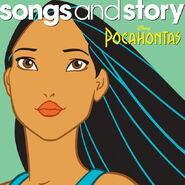 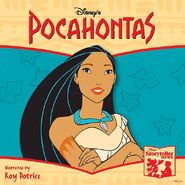 iTunes cover (2017-present)
Add a photo to this gallery

Retrieved from "https://retromedialibrary.fandom.com/wiki/Pocahontas?oldid=64059"
Community content is available under CC-BY-SA unless otherwise noted.