English (Closed Captioned)
Pocahontas was released on VHS as part of the Walt Disney Masterpiece Collection on February 28, 1996, with the first copies produced in December 1995. In its first week, 17 million copies of the VHS were sold in North America. The video was discontinued in 1997, but was re-released as part of a 2-pack with The Aristocats or James and the Giant Peach that year for a very limited time.[1]

Disney's most beautifully animated masterpiece boldly brings to life a fun-filled adventure of hope, courage, and friendship. True to the spirit of every Disney classic, Pocahontas became the #1 family film of the year -- bursting with "all the colors of the wind"! Along Virginia's lush tidewaters, Pocahontas, the free-spirited young daughter of Chief Powhatan, wonders what adventures await "just around the riverbend." In sails the gold-loving Governor Ratcliffe, with his pampered pug Percy and a shipful of English settlers -- led by their courageous captain, John Smith. Joined by her playful pals Meeko, a mischievous raccoon, and feisty hummingbird, Flit, Pocahontas relies on the lively wisdom of Grandmother Willow. A chance meeting with Captain Smith leads to a friendship that will change history, as the Native Americans and English settlers learn to live side by side. Featuring a #1 hit soundtrack that teams Academy Award(R)-winning composer Alan Menken with Broadway veteran Stephen Schwartz -- and an all-star voice cast -- Pocahontas surrounds you with the riches of "another glowing winner in Disney's animated hit parade!" 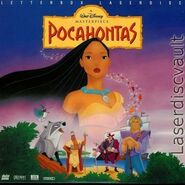