English
PBS was originally the National Educational Television network, or NET for short, which was founded in 1952, and television broadcasts commencing on May 25, 1953, starting with the PBS station KUHT-TV. On October 5, 1970, NET officially became the Public Broadcasting Service, or PBS for short. The company's old logos were rediscovered on Wikipedia on May 29, 2005, and on YouTube since around January 2006.

Children's programming began on February 19, 1968 with Misterogers' Neighborhood (color episodes began in 1969), followed by Sesame Street on November 10, 1969, The Electric Company on October 25, 1971, and ZOOM on January 9, 1972, the latter being the first one produced by WGBH Boston. These were the only four shows made for kids that aired on PBS during the 1970s.

The fifth program made for kids licensed by PBS, 3-2-1 Contact, premiered on January 14, 1980, several months before ZOOM was last seen on reruns. Another show called Reading Rainbow premiered on June 6, 1983.

On October 4, 1985, The Electric Company ceased broadcasting on reruns, leaving behind Mister Rogers' Neighborhood, Sesame Street, 3-2-1 Contact and Reading Rainbow as the only four shows made for kids to remain on PBS. A replacement program from the Children's Television Workshop, Square One Television, premiered on January 26, 1987.

Shining Time Station, the series that introduced Thomas & Friends to U.S. viewers, premiered on January 29, 1989. This marked the first time there were at least six shows made for kids available on PBS, all of which were closed-captioned by the National Captioning Institute.

Transition from NET to PBS

The network was renamed PBS on October 5, 1970. Despite not being affiliated with any of the "Big Six" film studios, PBS has provided the most public television stations in America.

As of November 1998, PBS has been available in HDTV (16:9/1080i) format, though nearly not any shows were presented in HD until at least in 2006. On September 6, 1999, PBS introduced a new generation of PBS Kids, in addition to the launch of a new digital over-the-air broadcast network with the same name on many PBS stations. 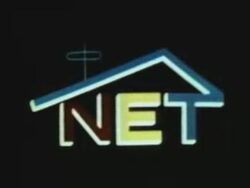 Two versions -- black and white, then color. Both versions had different voiceovers. It appeared on the first season of Mister Rogers' Neighborhood (the one in black and white) and also on Seasons 2-3 from February 10, 1969 to November 19, 1971, as well as on other shows like Washington Week in Review and Sesame Street. It's still intact on the "Sesame Street: Old School Volume 1" DVD set.

The logo was most likely last seen in 1981, when Mister Rogers' Neighborhood aired the second half of its 1969 season for the final time on PBS stations. 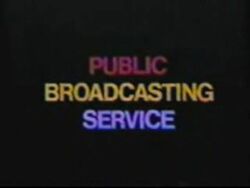 A too plain logo, it is now extremely rare, as it is no longer seen on TV at all, but was seen on Mister Rogers' Neighborhood (only the initial broadcasts of Season 4), Sesame Street, and early episodes of Masterpiece Theatre. 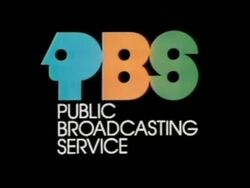 It's pretty unlikely that you'll ever see this on TV again, but it's still intact on the "Best of the Electric Company" and "Sesame Street: Old School" DVD sets. This logo has appeared on Mister Rogers' Neighborhood (since November 22, 1971; reruns included), along with three other programs: Sesame Street, The Electric Company, and ZOOM, which were the only programs available for children until 1980. Other programs that had this logo in its late years were 3-2-1 Contact and Reading Rainbow.

The MacNeil/Lehrer NewsHour, PBS' flagship news program, last used this logo on September 28, 1984, although the logo itself continued use on pre-1984 episodes of Mister Rogers' Neighborhood (up to #1535) until the late 1980s. 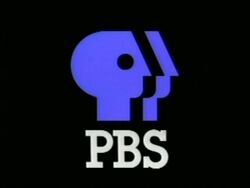 The PBS logo was redesigned in 1984, and was seen at the end of programs such as Mister Rogers' Neighborhood (usually on Episodes 1536–1610, which first aired from November 19, 1984 to May 5, 1989, as well as on initial closed-captioned broadcasts of older episodes), Sesame Street, Reading Rainbow, 3-2-1 Contact, Square One TV, and several more.

On one variant, the first episode of Square One TV has the logo multiplying off into the distance. 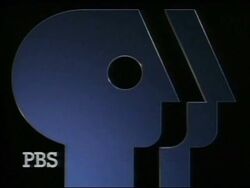 Practically all the Barney & Friends videotapes from 1992 have a silent version of this logo. 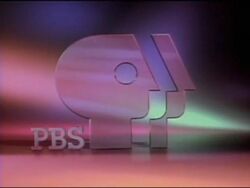 You still might find this on VHS prints of programs from the mid 90's, but other than that, it was the last logo to be seen on children's programming, before the PBS Kids idents began. Such shows include Sesame Street, Reading Rainbow, Ghostwriter, and Shining Time Station.

This logo was first seen at the end of the January 5, 1993 broadcast of The MacNeil/Lehrer NewsHour, and continued use through September 4, 1996.

It was also seen after Barney in Concert during the Barney & Friends Family Marathon in March 1993. 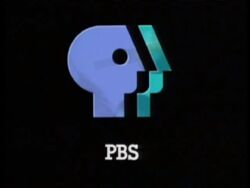 Like the other PBS idents, it's best to find it on PBS videotapes.

The NewsHour with Jim Lehrer used this logo from September 5, 1996 to September 30, 1998. It also likely appeared on 1997 reruns of the 1995 Shining Time Station specials, as the 1993 regular PBS logo was seen on initial broadcasts. 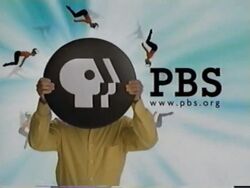 When programs began being presentable in HDTV format, the logo slightly changed in 1998. Here, it had many different people holding up a disc with the P-head on it, and different acrobats jumping from all directions. It is the first to contain the company's web address (www.pbs.org). 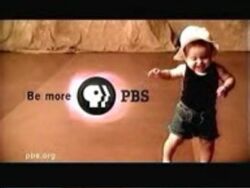 When the logo changed yet again in 2002, it inluced the slogan "Be More". It can still be seen on lots of primetime shows from the 2000s decade, as well as on digital broadcast networks affiliated with PBS.

It first appeared on The NewsHour with Jim Lehrer on September 23, 2002.

This ident is currently seen on many programs in ordinary PBS stations.

This logo can be seen on the Mister Rogers Meets New Friends Collection DVD, which was released on October 27, 2020.

When the show aired on the online streaming channel "Twitch", these logos were used at the end of each episode of Mister Rogers' Neighborhood: