From Walt Disney Animation Studios comes the action-packed adventure Ralph Breaks the Internet. Ralph and fellow misfit Vanellope risk it all by traveling to the world wide web in search of a part to save her game, Sugar Rush. They’re in way over their heads, so they must rely on the citizens of the internet—including Yesss, the head algorithm and heart and soul of the trend-making site BuzzzTube, and Shank, a tough-as-nails driver from the gritty online auto-racing game, Slaughter Race—to help them navigate their way. 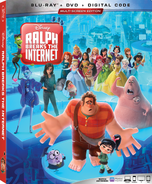 Retrieved from "https://retromedialibrary.fandom.com/wiki/Ralph_Breaks_the_Internet?oldid=71687"
Community content is available under CC-BY-SA unless otherwise noted.