After its second theatrical release on March 26, 1982, Robin Hood (1973) was the first title to be released under the Walt Disney Classics lineup. The video's pre-book date was on November 15, 1984, with a shipping date of December 3.

This VHS marks the first to contain closed captioning, done by the National Captioning Institute.

The video was sent back into moratorium in North America by January 1987, but was still available in Europe (see below).

The animals have their own version of what really happened in Sherwood Forest, as the tale unfolds in this classic motion picture! The world's oft-told and best-loved story includes brilliant animated characters and magical songs that present the legendary English hero and his troupe of jolly followers in a whole new way. Here's one of Disney's loveliest films -- one the whole family will treasure!

After the film is the Walt Disney and You promo, first seen on 1983 prints of previous films.

Robin Hood aired on cable television for the first time on The Disney Channel in 1985. The film eventually made its network television premiere on ABC on April 27, 1986. 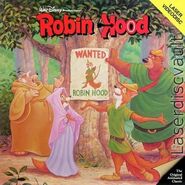