English (Closed Captioned)
After a four-year moratorium, Robin Hood returned to stores on VHS on July 12, 1991 to capitalize off the release of Robin Hood: Prince of Theives starring Kevin Costner. Disney kept the title in print, joining Alice in Wonderland, Dumbo and The Sword in the Stone. It also marked the first time ever when Robin Hood was priced at $24.99. The videos were later re-packaged as part of the Walt Disney Masterpiece Collection starting in 1994.[2]

The legend of Robin Hood... one of the most cherished stories of all time is brought magically to life as only Disney can do! The spirit of fun and romance abounds as Robin Hood, the swashbuckling hero of Sherwood Forest, and his valiant sidekick, Little John, plot one daring adventure after another! Maidens and minstrels look to Robin and his band of merry men to outwit the greedy Prince John and his sniveling partner, Sir Hiss, as they put the tax squeeze on their poor, hardworking loyal subjects. Wonderfully enchanting storytelling, delightful music and brilliant Disney animation make Robin Hood a treasure your whole family will enjoy again and again!

1992 re-prints of the video do not have any previews, and the warning screens are different. 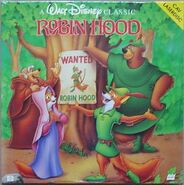