Prince Charming goes to the highest room of the tallest tower to find Princess Fiona, but she's on her honeymoon with Shrek at the swamp. One day, Fiona receives a letter from Far Far Away, and Donkey goes with them. When Fiona introduces Shrek to her parents, the King and Queen, they are surprised. Even the Fairy Godmother is shocked to see that Charming did not rescue her. The next day, Shrek and Donkey take a walk in the woods and are greeted by Puss in Boots. They go to the Potion Factory to find the best potion for Shrek. After stealing it, both Shrek and Donkey drink from it and turn into a real human and a horse. Even Fiona changes. Now precisely before 12 o'clock midnight, they must kiss each other in order to remain their true selves permanently. But Shrek, Donkey and Puss in Boots get arrested, and now the other characters from fairy tales must rescue them so that they can head over to the castle of Far Far Away. They bake a giant gingerbread man, who ends up falling flat in the moat. Shrek manages to make it, but the Fairy Godmother tries to stop them. Unfortunately, the King shields them and turns into a frog. Then, as midnight appears, Shrek, Fiona and Donkey are back to their normal selves, and they all live happily ever after.

This film contained trailers for films like Shark Tale, Disney/Pixar's The Incredibles, Fox's Garfield: The Movie, and Warner Bros.'s The Polar Express. 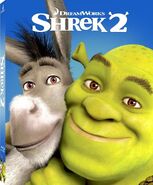