It started with a loveable ogre...who befriended a talking donkey...and rescued a beautiful princess in the unforgettable story that broke the mold for all animated films to follow. Now comes Shrek Forever After, the hilarious and fitting finale to the record-breaking, Oscar-winning movie phenomenon. Longing for the days when he was a "real ogre," Shrek signs a deal with Rumpelstiltskin to get his roar back - but turns his world upside down in the process. Donkey suddenly can't remember his best friend; Fiona is now a tough warrior princess; and Puss in Boots is one fat cat! Together, they have just 24 hours to reverse the contract and restore happily FOREVER after to close the final chapter. 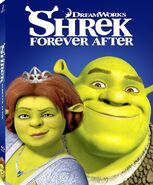 Retrieved from "https://retromedialibrary.fandom.com/wiki/Shrek_Forever_After?oldid=62999"
Community content is available under CC-BY-SA unless otherwise noted.