English (Closed Captioned)
The first title to be released with Hi-Fi Stereo sound after its next re-release on March 7, 1986, the price for Sleeping Beauty was completely lowered to $29.95. Unlike many other Disney films, Sleeping Beauty included its original Buena Vista Film Distribution logo.

After Walt Disney Telecommunications' contract with NCI expired, the film was captioned by The Caption Center at WGBH when released on VHS on October 14, 1986. If you have this print, you'll see what I mean.

Sleeping Beauty made its cable television premiere on The Disney Channel on October 3rd, 1987, and was followed with several airings into November. 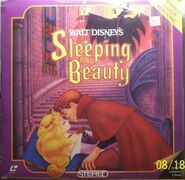