A spectacular achievement in the art of animation, Walt Disney's Sleeping Beauty has awakened - the dazzling beauty of this timeless animated masterpiece now fully restored for the first time.  Created in the Disney tradition of Snow White and the Seven Dwarfs and Cinderella, the unforgettable story is a breathtaking tapestry of charming romance, majestic spectacle and electrifying adventure. Once upon a dream, the lovely Princess Aurora is gifted with grace and beauty - but she provokes the jealousy of the wicked fairy Maleficent. A delightful trio of kindhearted Good fairies do their best to protect their beloved Princess - but even their magic is no match of the terrifying Mistress of All Evil, and Aurora falls into an enchanted slumber.  The heroic Prince Phillip must brave many dangers -- and finally battle a ferocious fire-breathing dragon - if he is to wake Princess Aurora from her eternal sleep!  With a magical Academy Award -- nominated score adapted form the immortal music of Tchaikovsky, Sleeping Beauty has been digitally remastered for this special Limited Edition -- a cherished classic for every Disney video collection and one your family will enjoy again and again.

Notice: Fifteen days after its North American home video release, this film was also available in Australia on October 1, 1997. 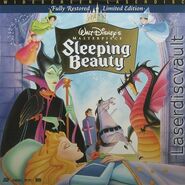 Retrieved from "https://retromedialibrary.fandom.com/wiki/Sleeping_Beauty_(1997_VHS)?oldid=72619"
Community content is available under CC-BY-SA unless otherwise noted.