DVD: The Sword in the Stone
Blu-ray: Ratatouille

Sleeping Beauty was the first of two Platinum Edition titles to also get a Blu-ray Disc release on October 7, 2008.

Awaken your senses to the majesty of Sleeping Beauty, Walt Disney's classic fairy tale. See more than you've ever seen before through the magic of state-of-the-art technology, and experience this groundbreaking film restored beyond its original brilliance, in the way Walt envisioned it -- pristine, beautiful, utterly breathtaking. Sleeping Beauty will transform your home into a fantastic world your family will want to experience again and again.

For the first time ever, the magic of Blu-ray high definition technology reveals the full scope of the glorious artistry and attention to detail in Walt Disney's groundbreaking Original Classic Sleeping Beauty. This spectacular 50th Anniversary Blu-ray edition is a sensory celebration - with more of the film than you've ever seen before! From the grand celebration of Princess Aurora's birth, to the fateful day when she falls under Maleficent's evil curse, to Prince Phillip's courageous battle against a fire-breathing dragon, the new digital restoration and Disney Enhanced High Definition Sound will awaken your senses and envelop you in this fantastic world. 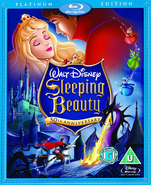 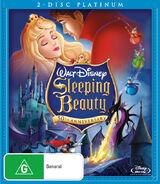 Retrieved from "https://retromedialibrary.fandom.com/wiki/Sleeping_Beauty_(50th_Anniversary_Platinum_Edition)?oldid=67110"
Community content is available under CC-BY-SA unless otherwise noted.