English (SDH), French, Spanish
As announced via YouTube and many DVDs since February 19, 2014, Sleeping Beauty was re-released on Blu-ray Disc, DVD, and for the first time for digital download in October 2014 as the 10th Diamond Edition title from Walt Disney Studios Home Entertainment.

Fall under the glorious spell of Disney's Ultimate Princess Fairy Tale! The magic is real as you experience all the pageantry and power on Blu-ray -- and for the first time ever on Digital HD -- with incredible high-definition picture and thrilling, soaring sound!

Beauty, wonder and adventure spin together in a grand legend that transcends time as Maleficent, one of animation's most spectacular villains, sends the kingdom's beloved Princess Aurora into an enchanted sleep. In a majestic story that awakens all your senses, Good Fairies arm brave Prince Phillip to defeat a fearsome fire-breathing dragon and rescue Aurora. But success in battle may not be enough, for the only way to awaken the Princess is with True Love's kiss!

Create memories that will last a lifetime with Disney's illustrious Sleeping Beauty -- a must-own for every family's classic collection! 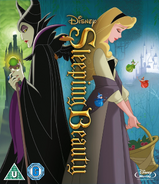 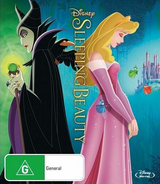