In this fully animated, all-new take on the Smurfs, a mysterious map sets Smurfette and her best friends Brainy, Clumsy and Hefty on an exciting and thrilling race through the Forbidden Forest filled with magical creatures to find a mysterious lost village before the evil wizard Gargamel does. Embarking on a roller-coaster journey full of action and danger, the Smurfs are on a course that leads to the discovery of the biggest secret in Smurf history!

Smurfette killed by a tyrannical troll named Crag, But the Smurfs traumatized by a trolls, KSI Robots and The Kraang capture all the Animals and slaughtering lifeless clay form, before the team's survivors escape the island following attacks by the Mosasaurus and the Tyrannosaurus packs, but they accidentally release the former into the ocean 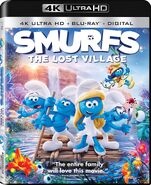