English (Closed Captioned)
As the first Disney animated feature film ever released in 1937 (and following its last theatrical re-release on July 2, 1993 when the film was digitally restored), Snow White and the Seven Dwarfs was announced for its first home video release in the fall on February 22, 1994. It was also the first ever title of the Walt Disney Masterpiece Collection. The first tapes were printed in May 1994, and the video began selling worldwide in October 1994.[2]

With the video release of Snow White and the Seven Dwarfs, this left The Aristocats the last Disney animated film without a VHS to date.

Note: The reason why the 1986 Walt Disney Home Video logo was used on Version 1 was because the Walt Disney Masterpiece Collection logo was not yet completed at that time. 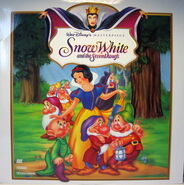