English SDH, French, Spanish
On April 3, 2009, Snow White and the Seven Dwarfs was officially announced for a Blu-ray Disc release also as the first Diamond Edition title, with a release date of October 6, 2009, marking the first time the film was ever shown in high definition.

After nearly five years of its last moratorium, Snow White and the Seven Dwarfs returned to store shelves on February 2, 2016.

No film in history has captured the world's imagination like Walt Disney's first full-length animated masterpiece. Through astonishing Blu-ray high definition technology, experience this timeless classic in its most spectacular presentation ever! With an all-new, state-of-the-art digital restoration and Disney Enhanced High Definition sound, the breathtaking animation and unforgettable music of the most revered Disney film of all time will enthrall you like never before!

Join the beautiful princess Snow White as she escapes her jealous stepmother, the queen, and befriends a lovable group of dwarfs. But when she falls under the queen's wicked spell, only true love's kiss can save her.

Generations have celebrated the magical story, memorable music and unforgettable characters of Walt Disney’s Snow White And The Seven Dwarfs. Now, this timeless animated classic sparkles like never before with an all-new, state-of-the-art digital restoration and exciting new bonus features!

The beautiful and kindhearted princess Snow White charms every creature in the kingdom except one—her jealous stepmother, the Queen. When the Magic Mirror proclaims Snow White the fairest one of all, she must flee into the forest, where she befriends the lovable seven dwarfs— Doc, Sneezy, Grumpy, Happy, Bashful, Sleepy and Dopey. But when the Queen tricks Snow White with an enchanted apple, only the magic of true love’s kiss can save her!

Share this beloved classic with your family, and celebrate Snow White’s happily ever after again and again!

Snow White and the Seven Dwarfs premiered on ABC Family on March 6, 2010. It also returned to Disney Channel in the same month. The film remained on air until March 2011. 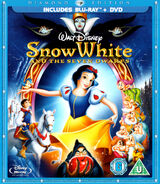