Super Speed! Bust the video game speed barrier wide open with Sonic the Hedgehog. Blaze by in a blur using the super sonic spin attack. Loop the loop by defying gravity. Plummet down tunnels. Then dash to safety with Sonic's power sneakers. All at a frenzied pace.

Super Attitude! Sonic has an attitude that just won't quit. He's flip and funny, yet tough as nails as he fights to free his friends from evil. So just wait. Sonic may be the world's next SUPER hero... 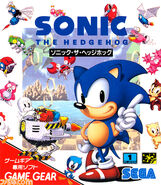 Sega Master System version
Add a photo to this gallery
Retrieved from "https://retromedialibrary.fandom.com/wiki/Sonic_the_Hedgehog_(video_game)?oldid=63286"
Community content is available under CC-BY-SA unless otherwise noted.