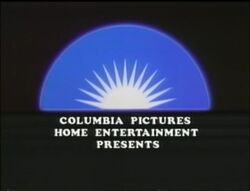 Columbia Pictures Home Entertainment was the home video label of Columbia Pictures, established in 1979 to distribute Columbia films on Beta and VHS videocassette formats. One of the most popular films to commonly use this logo was Monty Python and the Holy Grail (1975).

The music is the same as the 1976 Columbia Pictures logo.

Here Comes Mr. Jordan = Columbia was originally going to release this film on VHS in November 1979 as one of their launch titles but got cancelled due to the huge success of Midnight Express.

1979 VHS cover for "Don't Raise the Bridge, Lower the River"

In 1982, RCA Corporation created a joint venture with Columbia Pictures Home Entertainment, changing the company's name to RCA/Columbia Pictures Home Video. This was their first logo, appearing on the original VHS releases of the very first Tristar Pictures films. By 1986, the logo gradually became less common to find.

The logo is silent.

A bit easier to find than its 1982 counterpart, this was RCA/Columbia Pictures Home Video's last logo. However, it mostly appears on films released by Tristar Pictures; until 1989, VHS tapes with Columbia Pictures films went straight to the film logo.

Yet again, the logo is silent.

This logo was only seen in Europe, Latin America, and Asia, mostly on 1980s VHS tapes of Columbia and Tristar Pictures films.

Like its domestic (U.S.) counterpart, the logo is silent.

After RCA's joint venture with Columbia ended on August 23, 1991, all further VHS releases since then were released under the brand name "Columbia TriStar Home Video".

Their first logo shown below is quite rare, seeing as though it mostly only appears on VHS releases of films released by Columbia and TriStar Pictures in 1991. One example is the 1992 VHS of Hook.

Even yet again, there is no music for this logo.

This logo is also quite rare, as it usually only appears on films released by Columbia or TriStar Pictures in 1992 and re-prints of older films from September 1992 to April 1993. Later prints of Hook on VHS contain this logo.

This was the last logo from the company to have no music whatsoever.

First seen in May 1993, Columbia Tristar Home Video's third logo is much more common to find than the first two logos. The logo was frequently in use until 1996 in North America on VHS tapes, Laserdiscs (and on early DVDs), then it was re-used starting in 1998, after the 1997 logo was no longer in use as the standard logo for VHS and DVD releases of films and television shows from Columbia TriStar Home Video.

The logo also appears on VHS and Laserdisc prints of early films with the 1993 Columbia and TriStar Pictures logos, and on DVDs under the Columbia Classics series.

This was the standard logo for all Columbia/Tristar Pictures releases on VHS from May 1996 to July 1997. It was seen on films such as Matilda, Fly Away Home, and Jumanji.

Very early DVD releases of such films also had this logo.

From mid-1997 to 1998, this became the standard logo for all VHS releases from Columbia Tristar Home Video. After that, they re-used the 1993 logo. Usually, the logo has no music.

This logo was only seen on most early DVD prints of Columbia Tristar films. It can be found on DVD prints of Stuart Little (1999) and Hook (1991).

Early in 2001, the company's name had slightly changed to Columbia TriStar Home Entertainment. This was the only logo to have the company's name from back then. It can be seen on DVD releases of Metropolis, Cowboy Bebop: The Movie, Hook (Superbit Collection edition), and Matilda: Special Edition. On VHS and early DVD releases, the logo is slowed down. The VHS variant on DVD can be found on the international region 2 and 4 DVDs of Charlie's Angels, S.W.A.T. (2004 re-print), the Region 1 DVD of Jeffery Blitz's documentary "Spellbound", The Order (UK release), Dirty Dancing (which is in scope ratio), China Moon, Monty Python's And Now For Something Completely Different (2004 re-print), the German DVD of Dark Blue World and the Australian DVD of Born Free + Living Free. It can also be found on the UK DVD of Stuart Little 2. The logo stopped getting used in 2005 although VHS releases in the UK & Ireland continued using it until April 2006.

After the current name of the company was adopted in late 2004, this current logo began in use on March 24, 2005, the same day when the PlayStation Portable was released. The first DVD with this logo was Are We There Yet?, released on May 24, 2005. The logo can be found on all Blu-ray Disc releases of Columbia and Tristar Pictures films.