Mario is super in a whole new way! Combining the finest 3-D graphics ever developed for a video game and an explosive sound track, Super Mario 64 becomes a new standard for video games. It's packed with bruising battles, daunting obstacle courses and underwater adventures. Retrieve the Power Stars from their hidden locations and confront your arch nemesis -- Bowser, King of the Koopas!

A VHS tape titled "Super Mario 64 Perfect Video" was released just days prior to the North American release of the game. It's sort of like a video game strategy guide, and runs for about 40 minutes in length. The video was distributed by Pioneer, GTV, and Mario the Video.

The real 36th track in the Super Mario 64 Original Soundtrack is a piano version of the Piranha Plant's Lullaby, which was unused in the game.

Of the following facts, these show what is different in the Japanese version of Super Mario 64.

In the Rumble Pak re-release version (only released in Japan), nearly all of the voice clips and sound effects from the U.S. version are retained. The last four facts were submitted to TMK on August 27, 2010. 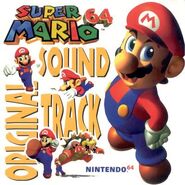 Entrance to Bowser in the Dark World

Bowser in the Dark World

Entrance to Bowser in the Sky

Bowser in the Sky

Final battle
Add a photo to this gallery

The End
Add a photo to this gallery

Retrieved from "https://retromedialibrary.fandom.com/wiki/Super_Mario_64?oldid=63391"
Community content is available under CC-BY-SA unless otherwise noted.