This time it's a fierce action-packed battle to free the land of Sub-con from the curse of the evil Wart. It's up to you, along with Mario, Luigi, Toad and the Princess, to fight your way through bizarre multi-level worlds and find him! This time you've got a brand new kind of power -- plucking power -- and now anything you find can be a weapon. But beware! You've never seen creatures like these! Shyguys and Tweeters! Ninji and Beezos! And you've never had an adventure like this! Only cunning and speed can save you now...

It all started late one night when our hero, Mario, had a very strange dream. In his dream, he climbed up a long winding stairway leading to a door. When he opened the door, he saw a world unlike anything he had ever seen before. As he peered into this wondrous world, he suddenly heard someone say in a faint and distant voice, "Welcome to the World of Dreams, the land of Sub-con. We have been waiting for you, Mario. We want you and your friends to fight against the evil ruler, Wart, and bring peace back to the World of Dreams."

On July 10, 1987, the game's origins were first seen in the Famicom Disk System title, Dream Factory: Doki Doki Panic, which was distributed by Fuji TV. In this game, the story begins with two kids reading a book, when a big green hand pops out and yanks them into the book. Their pet monkey runs off to find help. A family finds the book, then decides to jump into it and save the kids. The plot for SMB2 was completely changed to Mario having a strange dream which involves himself climbing up a long staircase leading up to a mysterious door.

Other differences include the following:

The Starman music is not listed here because it is very similar to how it plays in Super Mario Bros.. 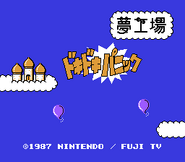 Famicom cover
Add a photo to this gallery

Bonus Chance
Add a photo to this gallery

Retrieved from "https://retromedialibrary.fandom.com/wiki/Super_Mario_Bros._2?oldid=68665"
Community content is available under CC-BY-SA unless otherwise noted.