Every hundred years a comet passes over the Mushroom Kingdom and rains down magical stars and stardust, and as Princess Peach and the citizens of the kingdom are celebrating the centennial event, Bowser and his legions attack. As Mario attempts to put a stop to Bowser's shenanigans, things go awry: the next thing he knows, he finds himself on a mysterious moon high above the Mushroom Kingdom. There, Mario encounters enemies and bosses while traveling around and between spherical worlds and flat space platforms.

Note: This was from the August 20, 2007 edit of the original Wikipedia article, published by JesseMeza. 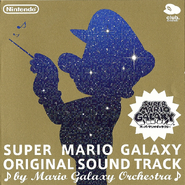 Add a photo to this gallery
Retrieved from "https://retromedialibrary.fandom.com/wiki/Super_Mario_Galaxy?oldid=62144"
Community content is available under CC-BY-SA unless otherwise noted.