Princess Peach invites Mario to the Star Festival, a time when Star Bits rain down from the skies over the Mushroom Kingdom. On his way, Mario finds a Luma, who immediately befriends him and grants him the ability to Spin. Shortly thereafter, Mario's archnemesis Bowser, who has grown to an immense size, invades and attacks the Mushroom Kingdom. Kidnapping the princess, Bowser escapes into outer space to create his empire at the center of the universe again. Mario is given control of Starship Mario, a mobile planetoid in the shape of his head, made by a crafty Luma mechanic called Lubba and piloted by other Lumas; his mission is to fly across the universe in pursuit of Bowser and the Princess and to help Lubba find the lost Lumas that were part of Bowser's plot.

Note: This was from the May 22, 2010 edit of the original Wikipedia article. 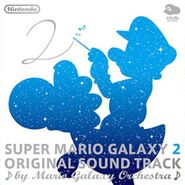 Soundtrack CD cover
Add a photo to this gallery
Retrieved from "https://retromedialibrary.fandom.com/wiki/Super_Mario_Galaxy_2?oldid=62182"
Community content is available under CC-BY-SA unless otherwise noted.