Mario's off on his biggest adventure ever, and this time he's brought along a friend. Yoshi the dinosaur teams up with Mario to battle Bowser, who has kidnapped Princess Toadstool once again. Guide Mario and Yoshi through nine peril-filled worlds to the final showdown in Bowser's castle. Use Mario's new powers and Yoshi's voracious monster-gobbling appetite as you explore 96 levels filled with dangerous new monsters and traps. Climb mountains and cross rivers, and descend into subterranean depths. Destroy the seven Koopa castles and find keys to gain entrance to hidden levels. Discover more warps and thrilling bonus worlds than ever before!

As of 1995, Super Mario World sold over 3.4 million copies worldwide. The game continued selling through late 1996, after its limited-time only "Player's Choice" edition was released.

Of the following facts, these show what is different in the original Japanese version of Super Mario World.

All of these other facts were confirmed on TMK as of December 17, 1999.

A bootlegged NES version of the game was released in 1995 by JY Company and Hummer Team in Taiwan. A gameplay video of the final battle was uploaded to YouTube on August 22, 2006. 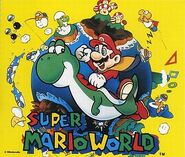 Player's Choice re-release cover
Add a photo to this gallery

The End
Add a photo to this gallery

Retrieved from "https://retromedialibrary.fandom.com/wiki/Super_Mario_World?oldid=66189"
Community content is available under CC-BY-SA unless otherwise noted.