Like the NES, the Super Nintendo Entertainment System can fit up to two controllers. It has a power switch to the left, an eject button in the middle, and a reset slider to the right. The controller has the Control Pad on the left, Select and Start buttons on the middle, Y/X/B/A Buttons on the right, L and R buttons on the top. The Y Button is green; the X Button is blue; the B Button is yellow; the A Button is red. The logo is on the top middle. Super NES games contain memory sizes ranging from 4 to 32 megabits, as well as 16-bit video graphics and audio.

In June 1994, an add-on adapter cartridge for the Super NES was introduced -- the Super Game Boy. Priced at $49.99, this accessory allows you to play Game Boy games while using a Super NES. In such cases, a border is included during gameplay. Games released before 1994 only contain the standard border, while games released during the Super Game Boy's existence contain full color graphics for the game and a special border for each certain game. 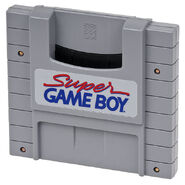 Super Game Boy.
Add a photo to this gallery
Retrieved from "https://retromedialibrary.fandom.com/wiki/Super_Nintendo_Entertainment_System?oldid=67134"
Community content is available under CC-BY-SA unless otherwise noted.