And you thought their last adventure was hilarious? Now the Mario Bros. are teaming up with their young selves on a quest of lunatic proportions. Control both sets of bros. in this action-packed role-playing game as you explore the very fabric of time and take on an evil alien entity known as the Shroobs. Use both screens to study the land, keep track of both pairs of Bros., and maximize combo moves in battle. Dodge attacks then use items like Red Shells to team up all four bros. for super moves! 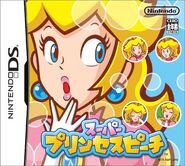 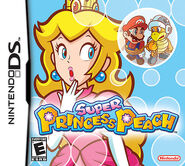 Cover art (U.S. version)
Add a photo to this gallery

Retrieved from "https://retromedialibrary.fandom.com/wiki/Super_Princess_Peach?oldid=51891"
Community content is available under CC-BY-SA unless otherwise noted.