Twilight Sparkle's Retro Media Library
Register
Don't have an account?
Sign In
Advertisement
in: The Walt Disney Company, Movies, Released before 1980, The Aristocats

The film takes place in Paris, set in the year 1910. An old woman named Madame Adelaide Bonfamille, along with her cats -- Duchess, Marie, Berlioz, and Toulouse -- are given a ride on a carriage that Edgar, her butler, drives, and her horse, Frou-Frou, pulls. On that same day, Madame Bonfamille's lawyer and long-time friend, Georges Hautecourt, arrives to her house. She tells him that with no living relatives left, she is leaving her fortune to her cats until their death, before reverting it to Edgar. Because of this, Edgar cooks up a scheme to get rid of the cats. First, he mixes sleeping pills with the cats' milk, then once the cats fall asleep, he sneaks them out of the mansion and drives into the countryside, where two farm dogs (Napoleon and Lafayette) chase him, also causing him to leave behind his umbrella, hat, and the basket with the cats. When Madame Bonfamille finds out that the cats have disappeared, she is saddened, but does not know that Edgar kidnapped them. The next day, the Aristocats meet Thomas O'Malley, an alley cat. He helps them get back home to Paris, first by riding the back of a milkman's truck. When Edgar returns that morning, he is the only one who is pleased that the cats are gone, but then realizes that he lost his hat and umbrella, and has to retrieve those items before anyone notices them as evidence that he is the catnapper. Meanwhile for the Aristocats, they are now seen crossing a bridge, but Marie falls off and lands in the river after they all hide under to avoid an incoming train, and O'Malley has to rescue her. Near the river, two geese (Amelia and Abigail Gabble) waddle by, and all together, the geese and the Aristocats waddle all the way to Paris, where they meet Waldo, the geese's uncle. That night, Edgar goes back to the farm to get back his items, where the dogs await. As for the Aristocats, they are seen walking on the rooftops, where in one of the houses, they find Scat Cat and his gang of alley cats. After a night of partying, and the departure of Scat Cat's band, O'Malley and Duchess share love with each other, until Duchess tells him that she and the kittens must return home to their owner. The next morning, they all return back home, but when Edgar sees them, he ties them up in a sack, which Roquefort notices. The little mouse runs to find O'Malley, and he tells them to warn Scat Cat and the alley cat gang about the second catnapping. Just after Edgar places the cats in a trunk which he plans to send to Timbuktu, Africa, O'Malley, Frou-Frou, and the alley cat gang barge in and fight Edgar, while Roquefort opens the lock and frees Duchess and the kittens. In the end, Edgar ends up inside the trunk, and is shipped to Timbuktu instead. Madame Bonfamille's will is rewritten to exclude Edgar, and include O'Malley and any future kittens he and Duchess would have. After posing a photo of the cats, Madame Bonfamille starts a charity foundation for all the stray cats in Paris.

Production of a sequel, The Aristocats II, began in December 2005, but was canceled a few months later. In addition, the movie was originally set for release as a 2-Disc Special Edition on March 27, 2007, but was delayed so Disney could add new, never-before-seen bonus features. 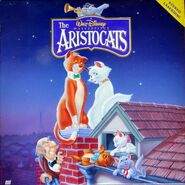