Set late in the 15th century in Paris, a group of gypsies sneak into the city, but are ambushed by Judge Claude Frollo and arrested. A young gypsy woman tries to flee with her baby son and into the cathedral of Notre Dame, but is chased by Frollo and killed. The baby survives, and is raised by the judge and forced to live in the bell tower in the cathedral. Not only that, he is given a new name -- Quasimodo, which means "half-formed." For his first 20 years of his life including his entire childhood, Quasimodo continues to live in the bell tower, with his gargoyle friends to keep him company. One day, the hunchback dreams of going to the Festival of Fools, which Frollo does not like even one bit. Down into the square, a captain of the Guards named Phoebus meets Esmeralda, another gypsy, and her goat, Djali. As it turns out, Esmeralda has magical powers that can often be used to evade being arrested by the soldiers. On the day of the Festival of Fools, Quasimodo disguises himself before attending, and much to his luck, is crowned the King of Fools by Clopin and the crowd. Then things start to go really awry for the hunchback as soldiers pelt him with tomatoes, followed by the entire crowd. They even tie him up and spin him around as he continues being pelted with all kinds of food. Esmeralda comes up onstage and frees Quasimodo, when Frollo tries to stop her. But Esmeralda disappears again, and Frollo orders the soldiers to guard every door in the cathedral, the place where she is to be arrested. When Esmeralda finds Quasimodo and befriends him, Quasimodo offers to help the gypsy by climbing down the cathedral so she can escape safely. When Frollo finds out about this, he searches everywhere in Paris to find Esmeralda, and orders Phoebus to burn down every house, even if they don't know where Esmeralda is. But Phoebus refuses, and at the end is sentenced himself. Phoebus tries to escape, but is struck by an arrow shot from one of Frollo's men. Esmeralda rescues him and takes him to the bell tower. Quasimodo hides Phoebus so Frollo can't see him, and Frollo declares that he will attack the Court of Miracles -- home of the gypsies -- at dawn. Quasimodo and Phoebus set out to find the Court of Miracles to warn all the gypsies about Frollo's attack, but when they get there, Frollo shows up as well, and arrests all the gypsies and even ties Quasimodo up in chains in the bell tower. Just as Frollo is about to burn Esmeralda to death, Quasimodo breaks free from his chains and rescues Esmeralda, then climbs back up to the cathedral and claims sanctuary really loudly that everyone in Paris could hear him, even Frollo. Then the judge orders his soldiers to attack the cathedral, while Phoebus releases all the gypsies, starting a war between them and Frollo's soldiers. Quasimodo and the gargoyles defend the cathedral by pouring molten copper onto the streets, but Frollo manages to enter. He pursues Quasimodo and Esmeralda to the balcony. Both he and Quasimodo fall off the edge, but Frollo manages to hang on to another gargoyle while Esmeralda holds on tight to Quasimodo's hand. Just as Frollo is about to kill them, the gargoyle breaks, sending Frollo falling to his death. Quasimodo's hand slips from Esmeralda, and as he is about to fall to his own death, Phoebus catches him at the last second. The next day, all the people in Paris hail Quasimodo and accepts him into society. 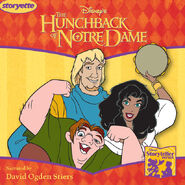 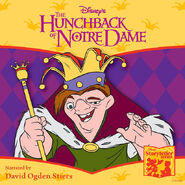