The Hunchback of Notre Dame's official soundtrack was released about three weeks before it came out in theaters in 1996. The album was later made available on digital MP3 in February 2008. 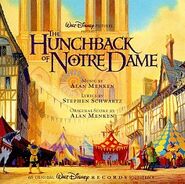 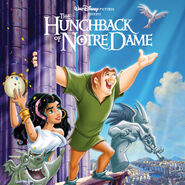 2008 digital cover
Add a photo to this gallery
Retrieved from "https://retromedialibrary.fandom.com/wiki/The_Hunchback_of_Notre_Dame_(soundtrack)?oldid=63362"
Community content is available under CC-BY-SA unless otherwise noted.