English (Closed Captioned)
After a theatrical re-issue on July 13, 1990, The Jungle Book was released on VHS on May 3, 1991. It was the first Walt Disney Classics title during the second generation of Walt Disney Home Video. The video lasted on sales until 1992 in North America, and was released on video in Europe in 1993.

Newer copies of this video had the green warning screens. 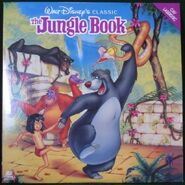