Unveiled in the summer of 2013 and released on February 11, 2014 on DVD and Blu-ray Disc was The Jungle Book: Diamond Edition.

Meet the most unforgettable characters and embark on a thrilling adventure with Mowgli as he journeys deep into the jungle and learns "The Bare Necessities" of life from happy-go-lucky Baloo the bear. Meet Bagheera, the wise old panther, and crazy King Louie, the orangutan. But watch out for the cunning tiger Shere Khan and Kaa, the sssssneakiest snake in the jungle!

Explore your family's wild side as you venture into The Jungle Book for extraordinary adventures and a heartwarming tale that celebrates the true meaning of friendship. 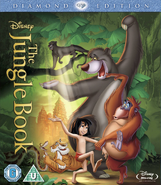 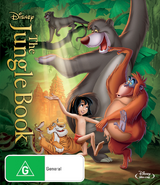 Retrieved from "https://retromedialibrary.fandom.com/wiki/The_Jungle_Book_(Diamond_Edition)?oldid=67702"
Community content is available under CC-BY-SA unless otherwise noted.