In this film, the animals arrive to celebrate the birth of a new cub, Simba, the future king. But Scar, another lion with a dark mane, also known as Mufasa's brother, is first in line. The next morning, Mufasa shows Simba that everything the light touches is their kingdom. But, he isn't able to go to the elephant graveyard. Zazu comes over and tells Mufasa his morning report, until he finds out that the hyenas are invading the Pridelands, so Mufasa orders him to take Simba home. When Simba visits Scar, he accidently tells him his secret. Hearing this, Simba tells it to his best friend Nala, but in order to get himself out of trouble, he says "around the water hole". But he wouldn't tell it completely, until he and Nala get there. Sarabi thinks it's okay for them, as long as Zazu is with them. Simba gets in a huge excitement that he would dream to be King of Pride Rock. Eventually, he and Nala lose Zazu and they end up in the elephant graveyard. There, they meet the hyenas, Shenzi, Banzai and Ed. They chase Simba and Nala in order to eat them, until Mufasa attacks them and scares them away. He glares at Simba for disobeying him. Later that night, they look up at the stars, where the great kings of the past would look down on them. Meanwhile, Scar and the hyenas hatch a plan to kill Mufasa and Simba, so that Scar could be king. The next day, Scar reminds Simba to work on his little roar. When he does so, a herd of wildebeests appears, creating a stampede. They chase Simba. Mufasa then appears to rescue him, but then gets knocked into the stampede. He then jumps up and tries to climb to safety, but Scar pushes him down. As Simba watches his father die, he tries to lift him up, but it's no use. Scar tells Simba to run away and never return, then orders the hyenas to kill him. They chase him again, only this time, to a patch of thorns. Again, they fail. While Scar claims the throne, Simba is in the hot sun, getting fed by buzzards. A meerkat and warthog (also known as Timon and Pumbaa) find him, and they teach him a new lesson -- Hakuna Matata, or no worries. Simba becomes a grown-up lion, and remembers what his father told him. The following day, Pumbaa gets chased by a lioness. Simba realizes that she's Nala, and they fall in love. Nala is worried about him at first because the Pridelands are ruined -- no food, no water. But Simba refuses to go back, until Rafiki tells him that Mufasa is alive. He is led to a reflecting pool, then the ghost of Mufasa appears, telling Simba that he should go take his place in the Circle of Life. He obeys, and finds out that Nala was right. Timon and Pumbaa would also help him. When Simba and Scar finally face each other, Simba admits that his father's death was his fault... until Scar tells him that he lied, and that he killed Mufasa. A fierce battle begins between the lionesses and the hyenas, then between Simba and Scar for the throne. Simba wins, and he becomes the new king. As this happens, Pride Rock regenerates, and Simba and Nala have a newborn cub.

The Lion King was the first animated feature to be an original story instead of being based on work that already existed.

The complete script was uploaded in HTML format to The Lion King WWW Archive in Spring 1997, and includes screenshots and sound clips of the film, all captured from the laserdisc and VHS prints. 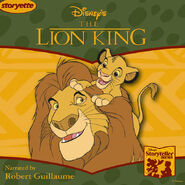 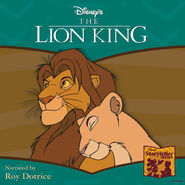 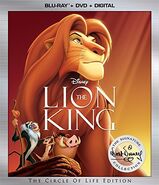