The Lion King was released on VHS on March 3, 1995, with the first copies produced in December 1994. It sold more than 20 million copies nationwide in just under one week, making its consumer sales record even greater than the combined one-day consumer sales of Beauty and the Beast, Aladdin and Snow White and the Seven Dwarfs. It went back into the Disney Vault on April 30, 1996.[2]

There was also a Deluxe Video Edition, which was more expensive than the original VHS itself. The Deluxe Video Edition also includes a second VHS, which only holds the documentary "The Making of the Lion King", which aired on the Disney Channel from June 16, 1994 (about a week before the film itself came out in theaters) through September 1996, days after the film first aired on the Disney Channel.

From the magnificent musical opening over breathtaking African vistas to its rip-roaring, emotionally charged climax, The Lion King reigns supreme as animation's greatest crowning achievement. Set amid the majestic beauty of the Serengeti, Disney's epic coming of age saga tells of the love between a proud lion ruler, Mufasa, and his son Simba -- a naive and curious cub who "just can't wait to be king." Out from the shadows prowl Simba's envious Uncle Scar and his hyena henchmen. Their scheming for the throne leads to tragedy... and Simba's exile from the kingdom he should rightfully rule. Befriended by the warmhearted warthog pumbaa and his manic meerkat companion, Timon, Simba forgets his regal responsibilities and adopts the carefree lifestyle of "Hakuna Matata." But can Rafiki, a wise mystic baboon, help Simba reclaim his true destiny in the "circle of life"?

With a #1 hit soundtrack featuring songs by Elton John and Academy Award winning lyricist Tim Rice, and score by Hans Zimmer -- and the greatest cast of voice-over stars ever assembled -- The Lion King triumphs with animation described by the New York Daily News as "no less than perfection...stunning!

In Japan, this video was the last to use the 1986 Walt Disney Home Video logo, while in all other countries except North America, they had the then-current Disney Videos logo instead. 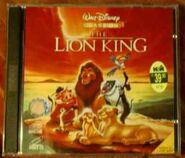 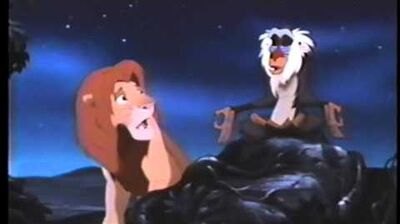 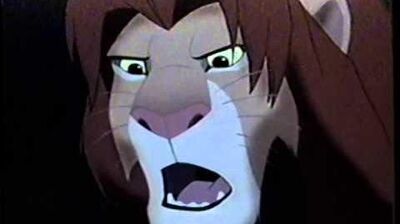