English SDH, English (Latin American import only), Spanish (Latin American import only)
As announced on January 23, 2003 and with its details unveiled on March 25, 2003, The Lion King was released on DVD for the first time as a Walt Disney Platinum Edition title in October 7, 2003, in which this new version debuted in IMAX theaters on December 25, 2002. The price of the DVD was $29.99, a deflation of 9% from its original 1995 price.

Experience the power and majesty that is The Lion King! With its unforgettable story, Academy Award-winning music, breathtaking animation and beloved characters, you'll be inspired by the tale of Simba, the feisty lion cub who "just can't wait to be king," and his journey to claim his place in the "Circle Of Life."

Now, in this dazzling 2-disc Special Edition, "there is more to see than has ever been seen" with an all-new song, never-before-seen animation, plus specially created bonus features that transport you into the world of The Lion King.

Disney's The Lion King Special Edition features an all-new song, "Morning Report," and never-before-seen animation, giving you even more of this award winning masterpiece-the greatest animated adventure of all time.

An unforgettable story, breathtaking animation, beloved characters and Academy Award-winning music ste the stage for the adventures of Simba, the feisty lion cub who "just can't wait to be king." But his envious Uncle Scar has plans for his own ascent to the throne, and he forces Simba's exile from the kingdom. Alone and adrift, Simba soons joins the escapades of a hilarious meerkat named Timon and his warmhearted warthog pal, Pumbaa. Adopting their carefree lifestyle of "Hakuna Matata," Simba ignores his regal responsibilities until he realizes his destiny and returns to the Pride Lands to claim his place in the "Circle Of Life."

Now extensively restored and remastered - experience The Lion King like never before, from its magnificent musical opening over breathtaking African vistas to its emotional climax. The all-star vocal talent - including Matthew Broderick, Jeremy Irons, Nathan Lane and Ernie Sabella - rip-roaring comedy and uplifting messages of courage, loyalty and hope make this timeless tale entertainment for all ages. 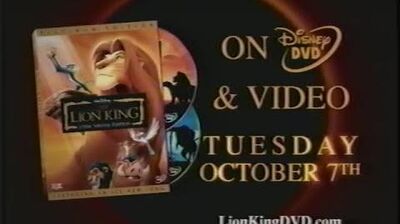