In this sequel to the original Lion King, we finally reveal the name of Simba and Nala's newborn cub -- Kiara. She's a girl, and once, she tries to run along, but her father tells her to be careful, because accidents can happen. He also wants her to stay inside Pride Rock at all times, and if she sees any strangers, she can't talk to them and must come straight home. But when she does so, she finds herself in the Outlands, where the Outsiders were exiled to. There, she meets Kovu, whom Scar adopted. Then they find themselves in trouble, by Simba and Zira, Kovu's mother. Simba teaches Kiara that she is going to be the future queen, and that they are one. But Zira threatens to punish Nuka, Kovu's older brother, that he was supposed to watch Kovu, but Kovu confesses that he went off on his own. Zira teaches him that he will be king someday. Rafiki also paints a picture of Kiara and Kovu, who have now become adult lions. The Outsiders are announced that Simba is their enemy, and that Kovu's goal is to kill him. But as for Kiara, she's ready for her first hunt -- to catch some deer. Meanwhile, Nuka and Vitani are lighting fires all over the valley. Kiara is covered in smoke, and hangs on to the edge of Pride Rock. Then Kovu appears to rescue her to a swamp. Simba breaks Kiara's promise that she would do everything on her own, but Kovu requests to join Simba's pride because he rescued Kiara. But the next day, Kiara teaches Kovu how to have fun, and they fall in love. Rafiki leads them to a place in their heart, called Upendi. Then Simba takes Kovu for a walk to the burnt place, and is ambushed by Zira and the Outsiders. They attack him, until they come to a hill of rolling logs. Nuka goes after him, but falls and dies as he tries to kill him. Zira prays for Scar that he must watch over him, then glares at Kovu. He tried to deny himself from betraying Scar, but it was too late, so he ran back to the Pridelands, where Simba is nursed by Timon and Pumbaa. As Kovu arrives, Simba banishes him. But Kiara goes after him, even though Simba wouldn't let her. Zira and the Outsiders are starting a war against the Pridelanders, until Kiara and Kovu stop them. Kiara tells her father, "A wise king once told me, we are one," causing the Outsiders to follow her. But Zira doesn't allow it, so she attacks Simba anyway. Kiara catches her, and they tumble down a cliff. Zira is now below Kiara, and is unable to climb up. But later on, the Pridelanders and Outsiders are reunited again.

The first pieces of information about this film were submitted to The Lion King WWW Archive in May 1998, including the voice cast. 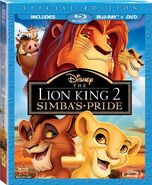