English (Closed Captioned)
The Little Mermaid was the first animated classic to be released on home video just months after its original theatrical release (November 17, 1989). The first copies were printed in February 1990. Within its first three months of sales, The Little Mermaid sold 7.5 million copies, and then eventually 10 million, making it the top-selling video of 1990. Sales lasted through April 30, 1991 in North America, when by then, it was released in Europe and Japan as well.

Somewhere under the sea, and beyond your imagination, lies an adventure in fantasy... Mermaids are supposed to stay under the sea, but there was never a mermaid quite like Ariel!  The headstrong teenager longs to be a part of the magical world on land, much to the dismay of her father, King Triton.  When she falls in love with a human prince, Ariel looks to Ursula, a divinely diabolical sea witch, who makes Ariel human in exchange for her golden voice!  With the help of her friends, shy, lovable Flounder and Sebastion, a reggae-singing crab, Arial must win her prince's love in a thrilling race against time!  On e of the most critically acclaimed films of the year, The Little Mermaid is full of dazzling animation, award-winning songs, and unforgettable new characters!  This Disney masterpiece is a treasure to be enjoyed now and for generations to come!

The movie made its cable television premiere on The Disney Channel on May 5, 1991, and was shown several times throughout the month. 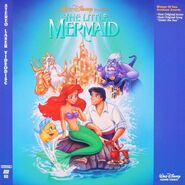