Dream big and laugh along with good ol' Charlie Brown, Snoopy, Lucy, Linus and the rest of the beloved Peanuts gang as you've never seen them before - in a brand-new feature film from the imagination of Charles M. Schulz and the creators of Ice Age. Join everyone's favorite eternal optimist, Charlie Brown, as he embarks on a heroic quest, while his beagle pal Snoopy takes to the skies to pursue his archnemesis, the Red Baron. It's a hilarious and heartwarming adventure that proves every underdog has his day!

English SDH, French, Spanish
The Peanuts Movie was released via digital video services on February 12, 2016, and on DVD and Blu-ray Disc on March 8. Copies of the DVD started production on December 22, 2015.

Bonus material include the following:

This DVD also includes trailers for Ice Age: Collision Course, Alvin and the Chipmunks: The Road Chip, and four other movies. 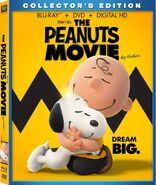 This film was released on Blu-ray Disc and DVD after The Good Dinosaur.