From the bright lights of New York City to the marshy swamps of the bayou, Disney's thrilling adventure classic follows the courageous exploits of two brave mice, Bernard and Miss Bianca.  Answering an urgent call from The Rescue Aid Society, they take off atop the trusty albatross Orville in their quest to rescue a little orphan named Penny from Madame Medusa -- a creepy criminal obsessed with finding the world's biggest diamond. But first they must outwit a pair of outrageous crocodiles before enlisting a spirited army of lovable swamp critters in a full scale invasion of Medusa's riverboat fortress!  Overflowing with action, music and brilliant Disney animation, The Rescuers is a timeless tale of heroism, friendship and teamwork that will entertain the entire family for years to come!

The Rescuers first aired on the Disney Channel on February 12, 1994. It aired twice more in late Winter 1994, from late Winter to early Spring in 1995, and four times from March to September in 1996. It also aired on off-network syndication on December 1, 1996. 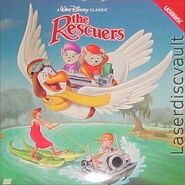 The Rescuers (1997 VHS; Australian version)
Add a photo to this gallery

Retrieved from "https://retromedialibrary.fandom.com/wiki/The_Rescuers_(1992_VHS)?oldid=72598"
Community content is available under CC-BY-SA unless otherwise noted.