English (Closed Captioned)
This movie was planned for a VHS release since January 1991, only two months after its theatrical release (November 16, 1990), with the first copies being printed on April 1991, followed by its official release date on September 20, 1991. It was also the first ever second-generation film on VHS within the Walt Disney Animation Studios films. This video remained in stores until April 30, 1993, and was the oldest release of a Walt Disney animated film on VHS to date as of September 15, 1998.

Hold on tight for a thrilling, fast-paced adventure unlike any other with The Rescuers Down Under! The world's bravest mice, Bernard and Miss Bianca, answer a call for help from deep in the heart of Australia's vast and unpredictable Outback! With a crazy crew of local critters, these top mouse agents rush to the aid of Cody, a young boy struggling to save a magnificent eagle from a ruthless poacher. But with restless natives and unexpected dangers popping up at every turn, who knows if they'll come to the rescue in time! Say "G'Day" to a classic Disney adventure full of unforgettable characters and incredible animation in this down-under delight you'll cherish for years to come!

On the Canadian Copies have the 1988 Walt Disney Classics Logo prototype version, instead of the 1989 logo.

The Rescuers Down Under was also seen after The Rescuers on off-network syndication on December 1, 1996. 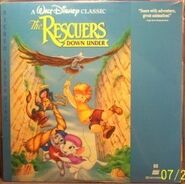 The Rescuers Down Under (Laserdisc)

The Rescuers Down Under (1992 VHS, Australian version)

The Rescuers Down Under (1998 VHS, Australian version)
Add a photo to this gallery

Retrieved from "https://retromedialibrary.fandom.com/wiki/The_Rescuers_Down_Under_(1991_VHS)?oldid=72969"
Community content is available under CC-BY-SA unless otherwise noted.