The official Sega logo was last modified in 1982. It wasn't until long after then when Sonic the Hedgehog was introduced, replacing Alex Kidd as the company's mascot.

Like Nintendo, the Sega logo appeared at the beginning of lots of video games. 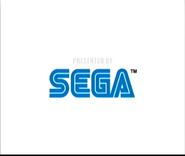