The Sword in the Stone was last seen in theaters on March 25, 1983, followed by its first VHS release on March 24, 1986. And once again, this title was priced at $79.95 like the previous titles under the Walt Disney Classics lineup. Also like the other films, the Buena Vista logo is removed from this film.

In October 14, 1986, The Sword in the Stone was reduced to $29.95 during the Wonderland Sale. On these re-prints, any trailers were removed, and the 1984 Walt Disney Classics logo was snippeted for half a second. The Sword in the Stone returned to its original price in early 1987. The video was re-released in 1989 and 1991, when it was priced at $24.99, and later as part of the Walt Disney Masterpiece Collection from 1994 through 1999.

A wondrous golden sword embedded in a large stone offers a tempting challenge to the strongest and bravest men in the kingdom; remove the sword and become the next king of England! The challenge causes one small boy to dream a dream so incredible that it causes a maelstrom of phantasmagoric events to occur! Awesome miracles! Malevolent wizards! Fire-breathing dragons! All against one boy's dream. The Sword in the Stone is the best of both worlds: a legend AND a classic!

Disney artistry brings a beloved medieval legend to life with new songs and surprises, and the result is a timeless film that has become a worldwide favorite. A young scullery boy named Wart is taught amazing lessons by the wizard Merlin who turns him into a fish, a bird and a squirrel so that he might understand the mysteries of life. Such lessons help the boy succeed where for centuries thousands of mighty men had failed. Whoever removes a wondrous golden sword embedded in a large stone will be crowned Arthur, King of England! Brilliantly executed and peopled with unforgettable characters, The Sword in the Stone is the best of both worlds: a legend and a Disney Classic!

Dazzling color and brilliant animation bring the medieval legend of King Arthur to life in The Sword in the Stone. With a forest full of charm, spectacle, and wizardry, Disney's classic tale conjures up delightful entertainment for all ages! England is in the midst of a dark age and without a proper king, Young "Wart," an orphan and squire-in-training, is content with kitchen duties in his foster home -- until he drops in on the extraordinary wizard Merlin and his articulate owl, Archimedes. Through three life lessons, Wart learns to set his "sights on the heights," armed with the most powerful forces on earth -- intellect, wisdom, and love. When it's time to contest who will be king, Wart must use his newfound knowledge to do what no mighty knight has done before! Join in all the magical marvels that make The Sword in the Stone a classic animated film and pure Disney gold!

Early copies contained the 1983 Walt Disney Home Video logo, while the regular prints had the 1984 Classics logo freezing for 10 seconds and surprisingly, the 5-minute Walt Disney and You promo after the movie. The 1991 print has new cover artwork with no changes to the tape master.

The Sword in the Stone aired three times on the Disney Channel in Spring 1989. It later aired there twice in August 1994 and during the second half of Summer 1995. It also aired on off-network syndication on October 22, 1995. 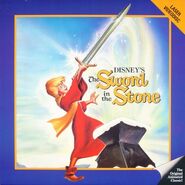 VHS cover (UK version)
Add a photo to this gallery
Retrieved from "https://retromedialibrary.fandom.com/wiki/The_Sword_in_the_Stone_(1986-1999_VHS)?oldid=63201"
Community content is available under CC-BY-SA unless otherwise noted.