On July 26, 2013, Warner Home Video announced the 75th Anniversary Edition of The Wizard of Oz for a release on Blu-ray Disc (also in 3D) on October 1.

A Collector's Edition set was also available through December 2014.

In this charming film based on the popular L. Frank Baum novel, Dorothy and her dog Toto are caught in a tornado's path and somehow end up in the land of Oz. Here she encounters some memorable friends and foes in her journey to meet the Wizard of Oz who everyone says can help her return home and possibly grant her new friends their goals of a brain, heart and courage. 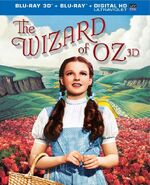 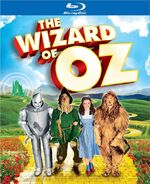 DVD cover
Add a photo to this gallery
Retrieved from "https://retromedialibrary.fandom.com/wiki/The_Wizard_of_Oz_(75th_Anniversary_Edition)?oldid=54976"
Community content is available under CC-BY-SA unless otherwise noted.