A boy named Andy likes to play with his toys -- mostly, his favorite is Woody, a pull-string cowboy doll. Today's his birthday, and he invites his friends. But this is a problem for Woody -- that Andy might get a new toy for his birthday. He starts a staff meeting and tells everyone to find a moving buddy, because Andy's mom is planning to move to a new house. Woody also reminds everyone that no one is to get replaced. As the mini-sergeant toys investigate Andy's presents, the "last" present is a board game. Then, the toys are warned that a surprise present is taken from the closet. The new present really was a new toy with a karate chop action, a laser light, a voice box and plastic wings. His name is Buzz Lightyear, a "space ranger" that came from Star Command. He introduces himself to everyone, and proves that he could fly around the room. He does so, but Woody convinces him that it's falling with style. As days pass, Buzz becomes more likely to become Andy's favorite toy. Then one day, Woody shows Buzz Andy's wicked neighbor Sid, who likes to torture toys for fun. For example, he lights a match to a firecracker taped to a Combat Carl. That evening, Andy and his mom go to Pizza Planet. She tells him that he can only bring one toy. Woody thinks he should be the one, but loses again as the fortune reads "Don't Count on it". He then tricks Buzz in order to knock him out the window. Just as Andy arrives into the room, he can't find Buzz, so he takes Woody instead. The car stops at the gas station, and that's when Woody and Buzz fall off the van, leaving them in the gas station together alone. Then they spy a Pizza Planet truck, and they use it to get to where Andy is. Buzz finds a rocket crane game, and jumps in. Inside are lots of alien squeeze toys. Woody follows him, and Sid manages to not only take one alien toy with him, he also wins Woody and Buzz. He takes them to his house, where a group of mutant toys live. The next day, Sid burns Woody's forehead with a magnifying glass. When Sid leaves, Woody and Buzz find the exit, but can't leave, as Sid's dog Scud is there. Buzz watches a commercial on TV about him, and proves the TV wrong that he really can fly. The TV was right -- Buzz instead crashes onto the floor. Sid's little sister Hannah finds him, and puts on a tea party with him. Woody imitates her mother, forcing her to leave. He then rushes into the room to grab Buzz so that he could use Sid's window to convince the toys to rescue him. As they see Buzz's broken arm, they refuse. The mutant toys gather around him and fix Buzz's arm, then disappear as Sid comes in with a huge rocket called "The Big One". He tapes it onto Buzz, but has to wait until tomorrow to send him into orbit, because it was raining. But before he was able to, Woody and the mutant toys hatch a plan to stop him. Sid notices that the toys are alive, and runs into the house screaming. Woody and Buzz escape, with the rocket still on Buzz. They could not catch up with Andy's van, but they do manage to climb up to the moving van. But Scud grabs onto Woody, so Buzz jumps onto his face and forces the dog to let him go. Woody opens the back door, and sees the toys in the boxes. He takes out R.C. to bring Buzz back, but the toys attack him, and toss him off the van. Buzz bumps into Woody, still riding the R.C. The toys realize that Woody was right, so they use Slinky to rescue him and Buzz. The batteries expire, so Woody lights the rocket to send them zooming. But then they go up into the sky. Buzz presses a button to let out his wings, tearing off the rocket, making it explode into bits. Woody and Buzz are now flying (although Buzz thinks they're falling with style), and they land in the van that Andy's mom is driving. Then it's Christmas. Andy's baby sister Molly gets a Mrs. Potato Head, and Andy himself gets a new puppy.

Toy Story became the highest grossing film of 1995, with a profit of $192 million domestically and $362 million worldwide (which, by today's standards, would be about $300 million domestically and $580 million worldwide). Alongside the film, a making-of documentary called "The Making of Toy Story: To Infinity and Beyond" aired twice on the Disney Channel, on March 22, 1996.

The film was also advertised on: 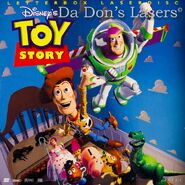