It all starts before cowboy camp. Andy accidentally tears Woody's arm, so he leaves him up on the shelf. He watches as another toy, Wheezy the squeeze-toy penguin, gets transferred over to a yard sale. After Woody rescues him, he is suddenly stolen by Al, a toy collector. This is a mission for Buzz Lightyear and several other toys to rescue him. Inside the apartment, Woody meets his "Roundup Gang" -- Jessie, the yodeling cowgirl, Bullseye, a horse, and the Prospector Stinky Pete. They even have their own TV show "Woody's Roundup". When Al comes back to film them, Woody's arm gets torn off, and now Al has to hire a cleaner to fix him. Meanwhile, the toys are going to Al's Toy Barn to find Woody. In one aisle, Buzz finds another Buzz Lightyear with a utility belt. After they fight, the other Buzz Lightyear puts Andy's Buzz into a box, and escapes with the other toys. Woody also chooses to stay with his gang and last forever, thinking that Andy will grow up and stop playing with toys. As for Al, the toys follow him as he celebrates being rich later on. After Andy's Buzz is Zurg. The Roundup toys are excited that they are going to Tokyo, Japan. But the other toys and Andy's Buzz try to take Woody home. But Woody doesn't let them, and chooses to stay... until he decides that Andy will play with all of them. But the Prospector blocks the door, and the Roundup toys, including Woody, are taken into the case. Buzz and the other toys chase after him by a Pizza Planet truck to the airport. Buzz manages to open the suitcase, but is knocked out by the Prospector, who ends up in a girl's backpack. The toys rescue Bullseye and Jessie, and when Andy comes back home, he is happy again with new toys. 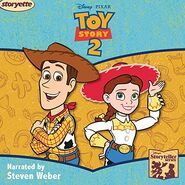 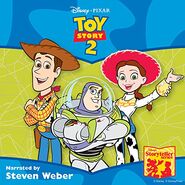 1/9
Community content is available under CC-BY-SA unless otherwise noted.