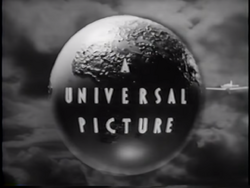 One of the earliest logos ever seen on video, it can be found on the 1984 VHS of The Bride of Frankenstein (1935).

Seen for 10 years from the 1930s to the 1940s, this logo is still intact on films released during those years.

In 1945, J. Arthur Rank merged Universal Pictures with International Pictures, changing the name to Universal International. This was the first logo to feature a colorful globe. It can be found on films like Great Expectations (1947), the Abbott and Costello films, and Spartacus (1960), so if you're a fan of 1950s films, then you will see this logo. 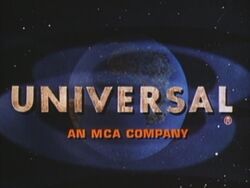 All logos up to the 1971 Universal Pictures logo were available on VHS since the format was invented. The 1971 logo was last seen on Bird on a Wire, which was released on VHS on November 15, 1990. 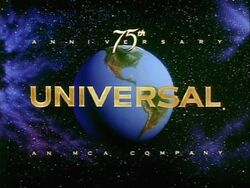 For the logo's first year, it also included the words "75th Anniversary" on top of itself. This variant was last used on October 3, 1991 with the A Kiss Before Dying VHS. As of November 7, 1991, the logo's standard variant was seen on any newer films on VHS.

In home media, the logo itself was first seen on the Back to the Future Part III VHS from November 8, 1990, and made its last appearance on That Old Feeling on October 7, 1997. Its last regular appearence was on trailers and TV spots for The Lost World: Jurassic Park (1997) but the film itself uses the next logo.

After MCA was reincorporated to Universal Studios, Inc. in 1996, the logo became bylineness for its last year.

On December 9, 1996, after MCA became defunct, the company became Universal Studios, Inc., and this next logo began appearing in theaters beginning on May 23, 1997. Beginning in 1999, the web address "www.universalstudios.com" appeared under the logo on any new Universal Pictures films. The web address made its last appearence on films released in 2010.

The logo made its VHS debut on The Lost World: Jurassic Park on November 4, 1997, and was last seen on the Blu-ray Disc releases of Big Miracle and Wanderlust on June 19, 2012.

In 2011, Universal Studios became a subsidiary of Comcast Corporation. Shortly after this, on January 10, 2012, the studio unveiled its current logo, promoting its 100th anniversary. The logo is currently seen on new releases from Universal Pictures in theaters. The Lorax, released on March 2, 2012, was the first film to use this logo, while the trailer for this movie had the 1997 logo instead. The byline "100th Anniversary" was last seen on Mama, on January 18, 2013, and starting with Identity Thief (February 8, 2013), the logo now just reads "Universal: A Comcast Company".

Before Illumination Entertainment, Universal's last film designed for kids released in theaters was The Tale of Despereaux, on December 19, 2008 (the trailer of that film was released alongside Disney and Pixar's WALL-E). At that time, Despicable Me was just recently announced as Illumination's first film.

A lot of events occurred to Illumination's films alongside production of My Little Pony: Friendship is Magic.