Carl Fredricksen, a 78 year-old curmudgeonly balloon salesman, is not your average hero. When he ties thousands of balloons to his house and flies away to the wilds of South America, he finally fulfills his life long dream of adventure. But after discovering an 8-year-old stowaway named Russell, Carl soon finds himself on a hilarious journey in a lost world filled with danger and surprises. 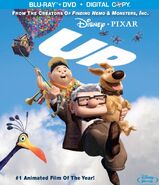 Blu-ray Disc cover (2016-present)
Add a photo to this gallery
Retrieved from "https://retromedialibrary.fandom.com/wiki/Up?oldid=63342"
Community content is available under CC-BY-SA unless otherwise noted.