Motion pictures
Walt Disney Pictures started off as Walt Disney Productions on October 16, 1923. Since then, third-party distributor RKO Radio Pictures released Disney movies from 1936 to 1954, before Buena Vista Distribution Company was founded. The name "Walt Disney Productions" first appeared in the opening credits as of 1968, and then at the end of each film as of 1971. This is due to the fact that Walt Disney himself died in 1966.

At the beginning of time, Walt Disney's films were distributed by RKO Radio Pictures. The first six animated films were released in theaters as follows:

During World War II, five more package films were made by Walt Disney, in addition to re-releases of films from earlier years to raise revenue.

Also making their theatrical debuts during this era were hybrid live action/animation films Song of the South (1946) and So Dear to My Heart (1948).

After World War II ended, Walt Disney continued production of animated films in 1948. New films during this era included Cinderella, Alice in Wonderland, and Peter Pan. However, the package films were shelved for a long time.

In 1953, Buena Vista Distribution was founded, and further production of Disney's films moved to there from RKO Radio Pictures.

Alice in Wonderland moved to network television as of November 3, 1954 on ABC after its original theatrical release. Dumbo also did not get a re-release during this generation. 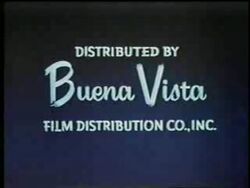 In 1960, the word "Film" was dropped from the company's first name, changing it to Buena Vista Distribution.

Mary Poppins' theatrical release on August 27, 1964 could be one reason why no animated films were re-released that year.

This was the last generation of re-releases during Walt Disney's life, before he died on December 15, 1966. 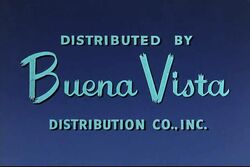 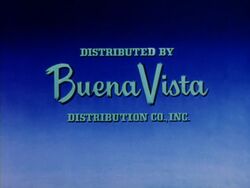 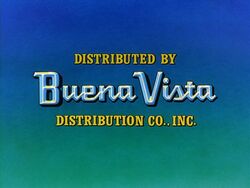 The sixth and final generation prior to the rebranding of Walt Disney Productions to Walt Disney Pictures, the following films were re-released:

During this era, The Many Adventures of Winnie the Pooh, Dumbo and Alice in Wonderland were all released on VHS in 1981. Fantasia, having not gotten a re-release in the previous generation, had two this generation, the second one in place of The Sword in the Stone.

As of October 14, 1983, an in-credit closing text logo was used for films distributed by Walt Disney Pictures until after September 28, 2007. The text logo comprises of the words "Distributed by Buena Vista Pictures Distribution".

Dumbo, The Many Adventures of Winnie the Pooh, Alice in Wonderland and Robin Hood no longer played in theaters as of this generation due to getting VHS releases at that time. 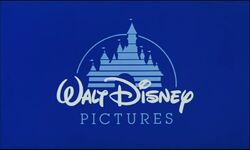 Lady and the Tramp, The Aristocats, Cinderella, The Fox and the Hound and Bambi all did not return to theaters for this generation.

A few films went through digital restoration prior to their final re-releases in theaters. The films released during this era include:

In 1990, the logo was modernized, and was first seen in The Prince and the Pauper on November 16 of that year. On VHS releases, it was first seen on DuckTales the Movie: Treasure of the Lost Lamp on March 15, 1991, when the second generation of Walt Disney Home Video began.

The last film to get a re-release in theaters within the old tradition was The Little Mermaid, on November 14, 1997.

Following the end of re-releases of old Disney films in theaters, Pixar Animation Studios released more of its own feature-length films, such as A Bug's Life and Toy Story 2, alongside the flagship company's animated films.

Some films with the regular logo appeared on television networks such as on TBS, ABC Family, and Hub Network. The last film to have it was The Fox and the Hound 2 on December 12, 2006, several months after the current Walt Disney Pictures logo began.

Starting in 2000, an alternate logo was spotted on some Disney movies, such as Dinosaur (2000), 102 Dalmatians (2000), Pirates of the Caribbean: The Curse of the Black Pearl (2003), and even the 2002 Special Edition re-release of The Lion King, which was later transferred to DVD in October 2003 after only playing in IMAX theaters.

When KRS Logos launched online in 2004, this logo was still current back then.

One of the last films to use this logo and the first to be presented in Disney Digital 3D was Chicken Little (2005). The Pixar version of the Walt Disney Pictures logo was seen on Pixar Animation Studios' first eight feature films, from Toy Story up to Ratatouille. Each film also always used the Pixar Animation Studios logo seen to the right of the Walt Disney Pictures logo. 13 years after its debut, this logo was discontinued on the Blu-ray and 3D releases of first two Toy Story films, Monsters Inc. and Finding Nemo 3D.

The current Walt Disney Pictures logo, done with CGI animation, was first seen on Pirates of the Caribbean: Dead Man's Chest on July 7, 2006 (on DVD on December 5, 2006). As of November 23, 2011, the logo now just uses the word "Disney" on brand new Disney films in theaters today, and on newer prints of classic Disney movies, especially the Diamond Edition prints.

As of 2008, Pixar now also uses the 2006 Walt Disney Pictures logo in every one of its films. WALL-E was the first Pixar film to have this logo.

As of March 30, 2007, starting with Meet the Robinsons (on DVD and Blu-ray Disc on October 23, 2007), the Walt Disney Animation Studios logo is currently seen on all new prints of Walt Disney animated feature films.

A lot of events occurred to Walt Disney Pictures' films alongside production of My Little Pony: Friendship is Magic.

Retrieved from "https://retromedialibrary.fandom.com/wiki/Walt_Disney_Pictures?oldid=73521"
Community content is available under CC-BY-SA unless otherwise noted.