Motion pictures
Warner Bros. Pictures was founded on April 4, 1923 by Albert, Harry, Sam, and Jack Warner. It is a major film studio owned by Time Warner, a media corporation in New York City. 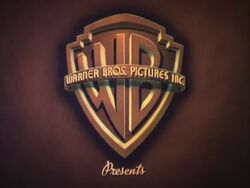 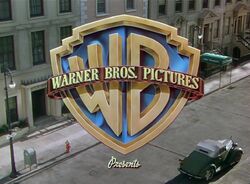 In November 1966, Seven Arts Productions merged together with Warner Bros., and the studio was renamed to Warner Bros.–Seven Arts.

After Warner Bros.–Seven Arts became defunct in 1970, Kinney National Company bought Warner Bros.. However, this partnership lasted for no more than two years. The logo appeared on A Clockwork Orange (1971), but only up to the 2000 DVD print. Other than that, the logo is very rare to find. Some movies like There Was A Crooked Man (1970) and THX-1138 (1970) had it on a black background. Others such as The Omega Man (1971) had it superimposed over the opening credits. Dirty Harry (1971) and Billy Jack (1971) do not have the "Presents" text. At the end of the film we see the print logo with "Distributed By Warner Bros." or "Distributed By Warner Bros. Inc." on top of or (in the case of "THX-1138") below it. Some movies like Easy Pickens (1970) and Chisum (1970) (the 1967 logo appears at the beginning) have no banner/byline on the superimposed version. It premiered on Performance released on August 7, 1970 and made its last appearance on What's Up Doc? released on March 12, 1972.

For at least 17 years, Warner Bros. Pictures and Warner Music Group became subsidiaries of Warner Communications. Only a few films had this logo, nearly all of them from 1972. On What's Up Doc? (1972), the logo is in gold on a book with a banner reading "Warner Bros. Pictures". "Presents" in script appears below the Warner Communications byline on The Candidate (1972). Of course, the logo does make its last appearance at the end of Steelyard Blues released on January 31, 1973 (the big W logo appears at the beginning).

This was the last Warner Bros. logo ever seen prior to the 1980s "Shield" logo. Examples of movies that had this logo are The Exorcist (1973) (presented austerely over a black background), All the President's Men (1976) (black and white), and the first three Superman films (1978-1983), but nowadays, when seen on DVD or Blu-ray, they most often use any of the newer logos below. It was first seen on Steelyard Blues (1973) and was last seen on Irreconcilable Differences (1984).

Whenever The Goonies (and many other 1980s films) aired on any television network (NBC, off-network syndication, HBO, Cinemax, The Disney Channel, TBS, TNT, ABC Family, AMC, etc.), this logo was usually always seen at the beginning. At the end of The Goonies (1985 the DVD release), the 2000 Warner Bros. closing print logo from Invictus (2000) is seen.

All of the Warner Bros. logos from before 1998 do not have any original music while others had music playing over it.

The ending variations since 2001 features the 1984 shield with "Distributed By' on top and the URL below the owner disclamer. It doesn't count as the 1984 logo since it was only a modified version of the 2001 Warner Bros. Television logo.

After AT&T acquired TimeWarner, the byline once again changed to "A WARNERMEDIA Company", first seen on films released since July 21, 2018, including Smallfoot (2018).

Starting with The Lego Movie (2014), this logo appears on all animated films from Warner Animation Group.

A lot of events occurred to Warner Animation Group's films alongside production of My Little Pony: Friendship is Magic.