Throughout the presence of the FAT32 version of Windows 96 as the current operating system in general availability, Microsoft was currently working on Windows 98, codenamed Memphis.

The original Windows 98 has the words "New Version!" on the software cover.

How to use Windows 98

The new startup logo runs exactly like Windows 95. The Enter Network Password screen looks the same, except the color scheme is slightly different. Nonetheless, I chose not to include it. The taskbar looks exactly the same as in Windows 95 OSR 2.5, because of the quick launch icons.

The Display Properties are also slightly different. You see, the Effects tab is added here, which allows you to make visual effects for the desktop. The Taskbar Properties are completely the same, though. Outlook Express 4.0 is retained on Windows 98.

The Control Panel has a few changes. Instead of the Joystick, you use the Game Controller, and instead of "Power", Windows 98 recognizes it as Power Management.

Pretty much identical to Windows 95.

All the games are quite the same as in Windows 95/96, so I didn't include those.

The Calculator still looks a bit the same as in Windows 95/96, only the font is not as bold.

Notepad has only one addition when you're running Windows 98 -- you can change the font. On Windows 95's Notepad, only one font can be used -- Fixedsys.

For Paint, there are some changes -- you now have the ability to not draw opaque, and the Options tab is now changed to the Colors tab, leaving you with only one option -- Edit Colors.

WordPad is fairly the same as in Windows 95/96.

Originally, the Media Player from Windows 95/96 is used on this operating system, but if you install Internet Explorer 4.01 Service Pack 2, you'll get a free, improved Windows Media Player 6.0. With this new Media Player, you can now open Wave files, MIDIs, MP3s, MPEG movie clips, QuickTime files, RealMedia files, .AVI video clips, .ASF and .ASX files all together. It is also the first version to display captions. All the other Multimedia components are retained the same as Windows 95/96.

The System Tools, including Disk Defragmenter, DriveSpace, Compression Agent, and ScanDisk, are all the same, but Windows 98 has a new component -- Disk Cleanup.

For the shutdown options, it's almost the same as Windows 95C, but with the Suspend mode disabled. 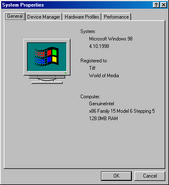 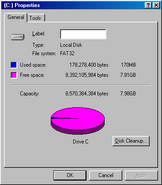 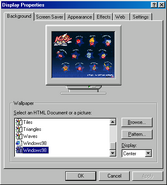 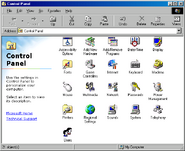 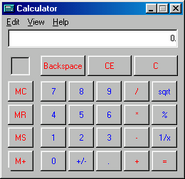 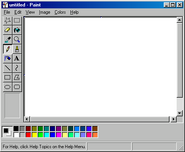 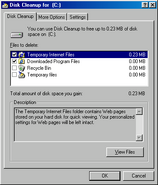 Shutting down Windows 98
Add a photo to this gallery
Retrieved from "https://retromedialibrary.fandom.com/wiki/Windows_98?oldid=63434"
Community content is available under CC-BY-SA unless otherwise noted.