After Windows 96 was released, this was the first Windows NT operating system (Build 1381) to contain a taskbar. The operating system was finalized on July 29, 1996, and reached general availability on August 24, 1996. Unlike Windows 95, 96, and 98, NT 4.0 was a lot more expensive and had much less criticism than those Windows 9x operating systems.

I was gonna install this on an 8 GB hard disk drive, but the computer kept saying the partition was too large, so I had to end up running it on a 4 GB HDD. Luckily, it has 64 MB of RAM.

Everything else, it's practically all the same as Windows NT 4.0 Workstation.

A blue screen will appear as you load Windows NT 4.0, then the startup logo will appear. And once again, before you start using this OS, you must login. After you type in the correct password, you can get to work.

Like Windows 95, the Welcome screen will appear the first time you run it. The taskbar is fairly the same as Windows 95, with the Start button and the running tasks. But because Windows NT 4.0 has the NTFS file system, the Windows Explorer looks a bit different. This is because the Dial-Up Networking program is included on Windows NT.

The Device Manager seems to be left out, but there are additional tabs as well.

The Display Properties screen has the Plus! tab, which Windows 95 doesn't have. And instead of saying High Color (16 bit), Windows NT recognizes the system as 65,536 colors. You can also refresh the system's frequency.

For the Control Panel, there are lots of changes. You cannot add new hardware using the Control Panel or equip a joystick, but there are additional features that only NT-based operating systems can do. Examples are equipping ports, SCSI adapters, servers, and tape devices.

Most of the accessories, like Calculator, Notepad, Paint, and WordPad, are all exactly like Windows 95, as well as the games. Unfortunately, Hearts is excluded from Windows NT. Instead, it is replaced by Full Tilt Pinball.

All the multimedia features are also the same, with the addition of a new component called the CD Player.

This NT-based operating system has many NT features, including Disk Administrator. Other features include Performance Monitor, Remote Access Admin, and User Manager.

On Windows NT, the MS-DOS program is called Command Prompt. Instead of "scandisk", you use the command "chkdsk" to examine your hard drive.

Service Pack 3 is also required for you to use some other certain software released in the late 90s, most of which are DirectX-based. In fact, DirectX 3.0 will automatically be included after SP3 is installed.

And if you install Service Pack 6a (which of course, requires SP6), you can use XP-based software such as .NET Framework 1.1 and Microsoft Office XP.

The shutdown screen is too simple. When it's safe to turn off your computer, you can restart by clicking on the Restart button. 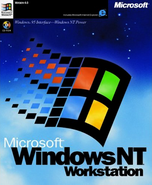 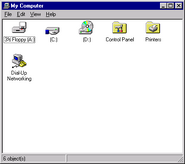 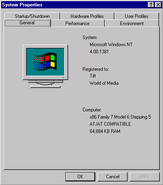 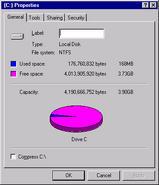 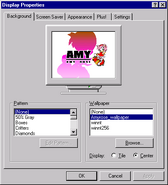 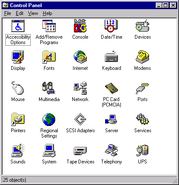 Software cover for Windows NT 4.0 Server
Add a photo to this gallery
Retrieved from "https://retromedialibrary.fandom.com/wiki/Windows_NT_4.0?oldid=63392"
Community content is available under CC-BY-SA unless otherwise noted.